One Year = One Very Large Blog

It is pretty ridiculous!! I know but when I get motivated to do something I just have to hurry and do it so I get it finished. I know it is extremely long but most likely no one will have to read it. It is just for my benefit knowing I have written down something of our past year.

Alexa's Blessing was pulled together in about 24 hours or less. We had all of Colin's family up for a funeral and decided it was the best/easiest time for everyone to be there. It is a good thing we decided on Alexa Anne because I am sure Colin would have changed it in the blessing anyway( I liked Alexa Jo). All in all it was a great day.

We were in Cedar for March while Colin was doing a rotation in OB. This month we found out we got our top choice for Residency at Mckay Dee hospital in Ogden. We were so relieved to finally know. We also got to spend St. Patrick's Day with the cousins, I had to post this cute picture of them all in green:)

Thomas' 5 year old birthday party was all about Star Wars! He was and still is completely obsessed with star wars. (I had to post this picture with Saxon and Brielle we miss them!)

EASTER 2009
I had to get the pictures of the kids with their Easter eggs on their ears it is something my mom did when we were little. 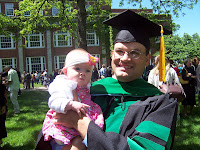 Colin Graduated from medical school!!!!! Now onto Residency!! We are all so proud of him and the hard work and studying he has had to do the past 4 years! Way to go!

Our summer consisted of fixing up our first home. We cleaned cleaned and cleaned some more, painted, put in new carpet and did many repairs and yard work. It was a lot of work but our house looks completely different from when we bought it. 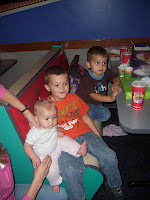 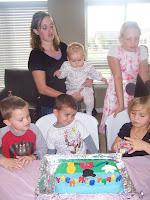 Jacob's 3rd birthday was a big hit.... well the idea at least. Saturday we went to Chucky Cheese he had been looking forward to this for the past 2 months. We potty trained him using the bribe of going there for his party. Well he got sick about 10 minutes after we got there. We had to change his underwear at least twice (finally put on a pull up I happened to have in the car) and was in the bathroom about 8 times so we packed up and headed home. During which he threw up twice in the car-- pretty sad! Sunday was his actual birthday and we had to go up to Logan for Ivory's blessing so we did a little mickey mouse clubhouse party and luckily he felt much better for this one! 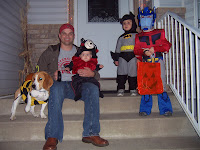 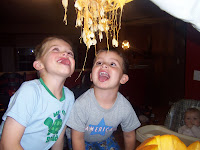 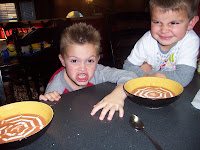 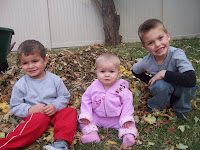 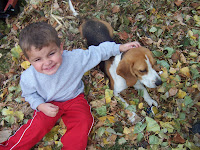 We had a blast cleaning up our leaves in our big back yard. I couldn't seem to keep the leaves in a pile and surprisingly it was not the kids that were the problem it was the DOG!! We would hide his ball in them and he would go crazy trying to find it. At least Lucky slept good that night. 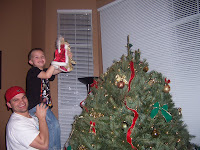 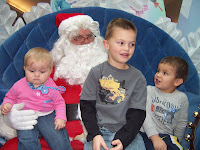 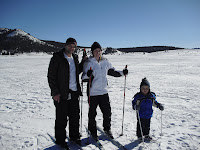 Christmas was a blast! We went to the Marshall cabin and the whole Marshall clan was there. We had so much fun opening presents with all the cousins, sledding, cross country skiing and just visiting with everyone! 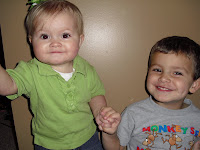 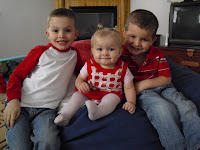 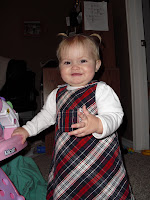 I just love these cute kids so much I had to post a few of my favorites!!
Posted by Marshall Fam at 9:52 AM 5 comments:

I know, I know many of you are in shock that I am posting a blog. I can probably only say it is happening because I am in Cedar for a few weeks and have a little extra time, so I thought it is now or never. I also thought a post was necessary since we have two major announcements!
The First is we want to welcome little ALEXA ANNE to our family. (this may be a shock to some since I never even posted I was pregnant) Alexa was born on February 6th. She was 8 pounds 1 ounce. The delivery was perfect, which I fully feel I deserved after my last delivery with Jacob. I got induced again but this time it was a short labor of about 8 hours from the time I checked into the hospital (the boys were 18+). Once things got rolling I only had to push for about 5 min. I don't know, it could have been the amazing doctor that delivered her that made it so easy. Thanks Daddy!!
This brings us to our 2nd major announcement which is Colin just got accepted to the Residency program at McKay-Dee Hospital in Ogden Utah. We are so proud of you Colin. Mckay-Dee was our first choice so it is quite a relief to know that is were we are going and we don't have to move out of state again.
As for the rest of the update on our family this is what we have been up to:
Colin- got a snowboarding pass at Beaver Mtn. for Christmas, so he has been snowboarding the last couple of months and loving it. He hasn't been able to snowboard since high school so he's been glad to start that up agian. I just hope we don't get any medical expenses out of his little hobby. He is getting anxious with his last couple of rotations now and just wants to be done as you can imagine.
Juli- I am doing great! I am having so much fun taking care of my little girl. It is so much fun to get her dressed and pick out her outfits. With the boys you just throw stuff on. Alexa has been a easy baby since the day she came. I recovered in less then a week and was back to all normal activities. I am also loving my new suv. Colin got me a Honda Pilot and it has been so nice. Our Toyota Camry was not making the cut with three kids.
Thomas- is such a big helper with the new baby he is an excellent binki holder. He is loving pre-school and is getting so smart. I can't believe he has gone to a full year of pre-school and will be starting Kindergarten in the fall. He will be 5 in a couple of weeks and is already planning his birthday party the only problem is he can't decided between a Star Wars or Transformers party. He has been obsessed with turning 5 since he was 2 because I told him he would get a dog when he was 5. Since we still don't have a house yet I am hoping I can hold the boys off until Christmas.
Jake- he is still a Tank! He pretty much can take Thomas down to the ground in anything they are doing, whether they are actually wrestling, boxing, playing basketball or racing some how they end up on the ground with Jake on top! We are in the never ending battle of potty training but we will just keep on trying.
Alexa- She is doing great! She finally decided to start gaining some weight and is now starting to get some chunky little thighs She is just perfect! She sleeps and eats great and is quite the happy baby with a beautiful smile. For the majority of time she is happy. There are only a few things she doesn't like that is being cold and having a stinky diaper.
Here She Is!! 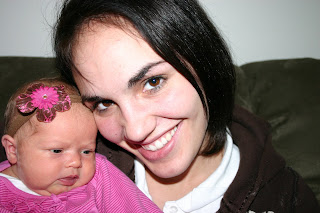 Lexi with her Aunt Jodi 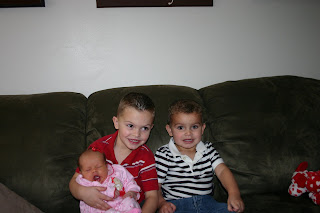 Lexi and the boys 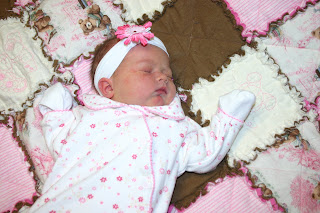 Lexi at the hospital
Posted by Marshall Fam at 4:51 PM 11 comments: